My dad and I are putting together a family website with his memoirs. In 1956, on June 30th the helicopter my dad was in crashed at Knob Lake north of Labrador. I always wondered what happened.

I am looking for people that would have of heard about that accident.

On the picture we can see what was left of the Sikorsky. We can also see a Catalina at the back.

After that my dad served has a doctor for the RCAF for three years. The second year he was based in El Arish in Egypt with the UN Peace Corps.

You can email Jeremy of Helihub news@helihub.com if he doesn't know - he will who to ask.

Hi!
Your picture shows the right hand side rear part of a Piasecki H21
Like those: 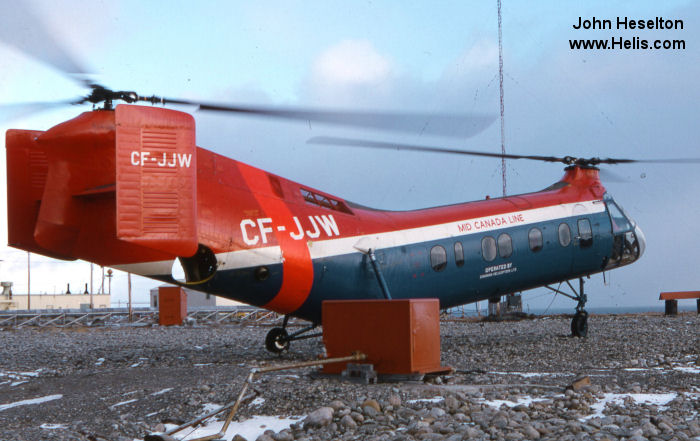 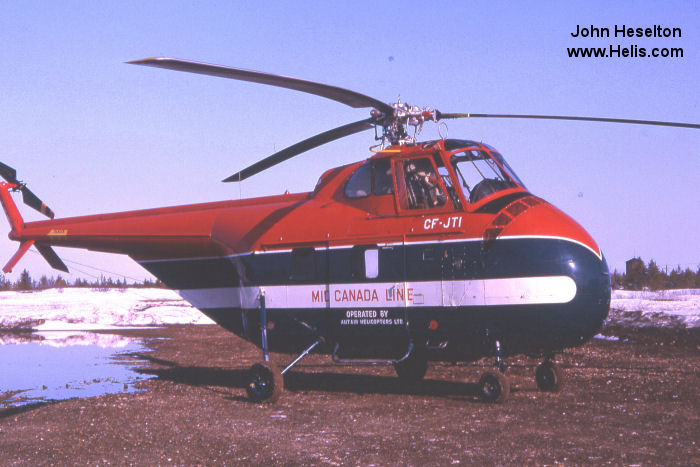 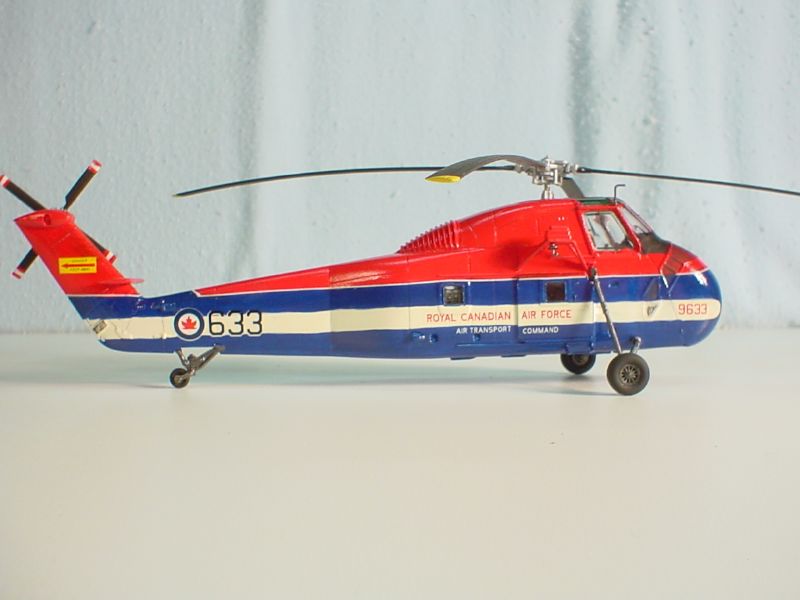 It makes sense after reading this story


Who Dropped It??
By Roger Cyr
In June or perhaps it was late May of 1956 and I was back at knob Lake for the third or fourth time. After almost fifty years I have a difficult time remembering all the trips I made into the Eastern Sub Arctic during the two and one-half years I spent with 108 Comm Flt helping build the Mid-Canada Line.

An H-34 Sikorsky out of Knob Lake with three crew members aboard experienced engine trouble and sat down hard on the shores of one of the many lakes that dot the northern landscape. A camp containing civilian workers was near by and they were able to find shelter and get a message through to Knob describing their predicament.

For reasons known only to powers far removed from the rank of LAC it was decided that I should be flown out to "guard" the helicopter that lay on it's side in the water and muskeg of an un-named lake along the 55th parallel. "We will be back to get you tomorrow." The crew of the H-21 told me as they flew away over the lake and sparsely wooded hills in a westerly direction.

Fifteen minutes after leaving me to fend for myself they too experienced engine failure and smashed into a small clearing wrecking their machine and seriously injuring one of the civilian workers who they were transporting to Knob Lake.

Finally on the fifth day another H-21 arrived and I was on my way back to Knob. Not so I was informed, for it was then that I learned of the plight of the other helicopter and the reason I had been left so long "guarding" the helicopter in the lake. I was dropped off at the latest crash site to help with the salvage operation. When I arrived the H-21 was on its side with a long jagged gash down the fuselage where one of the blades had pierced the metal and severed the arm of a civilian worker.

A Tech Rep who was based in Ottawa and two senior officers were inspecting the damage and they recommended the chopper be airlifted back to Knob and eventually Ottawa where a more extensive inspection could be done. Although I cannot remember the Tech Reps name, he and I had met during the previous winter when he smashed into my new car in the Squadron parking lot. He was from the southern USA and had never experienced a Canadian winter!

It took us the better part of three days to winch the fuselage into a position where we could remove the engine and rotor heads. We prepared the helicopter for transport back to Ottawa and I returned to Rockcliffe having completed my tour at Knob.

I had been back at the squadron a week before the helicopter arrived looking more beat up then when I had last seen it. Senior Officers and Technicians arrived to inspect the damage, and when the Tech Rep recognized my face he called me aside and said, "you dropped it." "It did not look like that when I inspected it at the crash site." "What am I going to tell my Company and especially Squadron Leader Hyslop." "This looks very bad for me suggesting to them that the ship could be repaired."

"I was not there when it was airlifted out." I said. They all left for a meeting in the CO's office.

That afternoon I received a phone call from the Squadron Orderly Room requesting my presence in the CO's office. I had a sickening feeling in the pit of my stomach as I stood at attention in front of S/L Hyslop.

"Good to have you back Cyr," he said. "I had a phone call from you mother when you were in Knob, she hadn't heard from you for a while" "You should write home more often"

I hope it helps!