"RCMP Supt. Howard Eaton said Aug. 24 that the girl recalled the plane was making its final approach and that everything looked normal."

“She said she was looking out the window and she could see the buildings [of Resolute Bay] as they approached,” said RCMP Supt. Howard Eaton, “and then, bam - they hit the hill.”

The survivor testimony seems to suggest that they DID NOT do an ILS/DME 35T circling for 17T. That would have required an increase in power to level off, and then at least two turns to get lined up 1 mile downwind where they crashed. The passengers would have noticed that.

It does sound more like they did a straight in approach and then hit the hill. That could support the theories of them accidentally approaching on the VOR instead of the ILS.

Lost in Saigon wrote:I am still puzzled by reports that they reported 3 miles final and then hit the hill 10 minutes later.

I'm not sure where the story about 10 minutes later ever came from. It may be that it was ten minutes till the Borek crew saw the accident scene on the hilltop.
---------- ADS -----------
Good judgment comes from experience. Experience often comes from bad judgment.
Top

Just another canuck wrote:Sounds like CFIT to me. And if it is, it wasn't the first time and it certainly won't be the last.

+1 They should pull this thread and wait for the Official Report. People will have forgotten about the newsclips by then, and the people scared of airtravel will not have to be alarmed?
---------- ADS -----------
Top

cncpc wrote:I'm not sure where the story about 10 minutes later ever came from. It may be that it was ten minutes till the Borek crew saw the accident scene on the hilltop.

1&2SpooledUp wrote:With the availability of a Straight in LOC/BC or GNSS approach to RWY 17 and the crews knowledge and familiarity of local terrain and given a wx report like this, I think the last thing the crew would have been doing is a circling approach to the east towards that hill. If you look at the photo you can see the fog bank lingering in the background and wasn't there an eye-wittiness report that stated the crash site was not visible initially because of the fog. Remember folks, a circling approach is a visual maneuver.


Its a visual maneuver until you enter cloud, then its a missed approach where you're off track, and possibly disoriented. What if while conducting a circling maneuver on the Captains side, you tuned up the VOR with the same radial as the inbound on the ILS to keep yourself parallel with the runway during the circling maneuver a mile or so off centre? Watch your altitude and start the turn just after VOR passage? And then something went horribly wrong...
Complete guess mind you, total speculation as I've never been there or flown a jet for that matter. I'm no stranger to old Indian tricks though when it comes to shooting the odd approach. I'm trying to put myself in their shoes is all.
I just don't see them tuning the VOR and tracking it instead of the Loc, I imagine they would have backed it up with the GPS and therefore should have known where they were. Even an old POS GPS would have told them the airport was a mile to the left of track.
It just would have looked wrong if backed up properly, even if it didn't register.
---------- ADS -----------
Top

cncpc wrote:I'm not sure where the story about 10 minutes later ever came from. It may be that it was ten minutes till the Borek crew saw the accident scene on the hilltop.

The CADOR says the occurence time was 1740Z. Some misunderstanding at First Air, I guess. The last communication was supposedly three back.

The Cador says this is the weather...

Weather was reported to be a 200 foot ceiling with 3 miles visibility in fog and drizzle; wind was 180 degrees at 10 knots.

That casts a different light. The ILS is barely makeable. The localizer 35 is about 150' below minimums. It doesn't say whether the ceiling was broken or overcast.

Definitely not the weather to circle, or to try a 540 minimum localizer if the glideslope seems to not be working.

fish4life wrote:Cador is ZULU time, that would be the difference

fish4life wrote:I was getting at the difference between 1740 and 1240


Ok, sure. The issue was about a ten minute gap in the timeframe.

Is the weather observation station at the airport in Resolute?
---------- ADS -----------
Good judgment comes from experience. Experience often comes from bad judgment.
Top

There seems to be discussion on the ILS Inbound track versus the VOR inbound track. Possibly you should address the "Instrument Transfer Switch" system, if this 737 was so equipped.
---------- ADS -----------
Top

The two female survivors reported the impact came completely unexpected with no obvious problem prior to impact. The girl received a leg fracture and was found sitting on a rock in tears by the 23 year old female, who also managed to get away from the wreckage, and taken to a safe place. Investigators could not yet speak to the male survivor due to health condition.

hartley wrote:There seems to be discussion on the ILS Inbound track versus the VOR inbound track. Possibly you should address the "Instrument Transfer Switch" system, if this 737 was so equipped.

hartley wrote:There seems to be discussion on the ILS Inbound track versus the VOR inbound track. Possibly you should address the "Instrument Transfer Switch" system, if this 737 was so equipped.

Is it this switch?


The big Gotcha with SP-177 equipped 737-200Advs and non-EFIS Classics were the HSI source selectors, sometimes referred to as “Killer Switches”. These were located either side of the MCP and changed the HSI to show deviation either from the LNAV or ILS/VOR track. It is vitally important that these switches are set to VOR/ILS before commencing an approach otherwise you will still be indicating LNAV deviation rather than LLZ deviation. 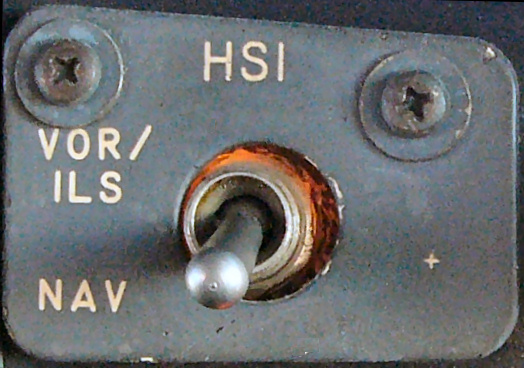 If either Nav receiver fails, the VHF NAV transfer switch may be used to display the functioning Nav information onto both EFIS and RDMI’s. With Nav transferred, the MCP course selector on the serviceable side becomes the master, but all other EFIS selections remain independent.

If an IRS fails, the IRS transfer switch is used to switch all associated systems to the functioning IRS 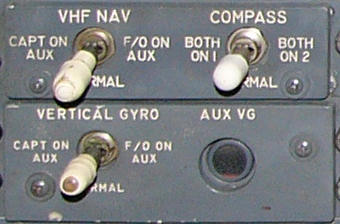 Wouldn't that switch be in the same position to navigate off of either the ILS/LOC or the VOR? The other selection being for GPS nav? And then wouldnt it come down to switching the frequencies from the VOR to the LOC at the beginning of the approach?
---------- ADS -----------
The only three things a wingman should ever say: 1. "Two's up" 2. "You're on fire" 3. "I'll take the fat one"
Top

We have one -200 with the SP-177 and it has a full MCP with an "LNAV" button. There is no switch to change over. When you want to do a VOR/LOC or ILS approach you hit the "VOR/LOC" and "APP" buttons as you would in a Classic or NG. I don't believe First Air has any SP-177 equipped machines.

In our SP-77 equipped -200s there is a push button, "FMS"/"VHF" or "FMS"/"VOR/LOC" and a few have another "LNAV" push button, depending on the airplane and FMS installed. This is for flight director and autopilot coupling. It is used to switch between GPS nav and VHF nav and I'm sure First Air's aircraft would have something similar.

With the SP-77, while in VHF nav mode, the only time there would be G/S indication would be with a valid ILS tuned up and the mode switch in "VHF" or "VOR/LOC", depending on the installation.

In my previous capacity with the Regulator and the Service Provider, I had a few discussions with the TSB folks, even gave them (at their request) an interpretation on TP-308 criteria for investigation proposes. TSB indicated several times (to me) if reliable data is available in the initial stage Field Phase, they can determine within a few days the direction the investigation is going to take. I’ll bet they have a very good idea now but the biggest stage is” why”……..
---------- ADS -----------
Top