Malaysia Airlines has “lost contact” with a Beijing-bound plane carrying 239 people.
In a statement, the airline said the B77-200 aircraft departed Kuala Lumpur just after midnight (local time) on March 8.
The plane was expected to land in Beijing more than six hours later.
The airline said authorities have activated their search-and-rescue team in an effort to locate the plane.
The airline said 227 passengers and 12 crew members are onboard.
Developing story...

Malaysia Airlines is currently working with the authorities who have activated their Search and Rescue team to locate the aircraft.
---------- ADS -----------
Top

I sincerely hope that's the case. It seems like a very weird situation though. Either way, here's hoping to a good outcome.
---------- ADS -----------
I'm glad I'm not judgmental like all you smug, superficial idiots
Top

Malaysian Airlines has stated that two Canadian Citizens were on board. Aircraft was at FL350 and last radar Updated; last known location midway between Malaysia and Vietnam in open water.

Two Canadians are among the 227 passengers and 12 crew members on board a Malaysia Airlines jet that has lost contact with air traffic controllers, an airline spokesman said.

The spokesman made the announcement during a brief news conference several hours after the plane disappeared from radar screens. International aviation authorities still haven't located the jetliner.

Earlier, the airline released a statement that read: "Our team is currently calling the next of kin of passengers and crew," adding that the passengers were of 13 different nationalities.

'Our thoughts and prayers are with all affected passengers and crew and their family members'
- Malaysia Airlines statement
The airline released the statement on its website Saturday saying Flight MH370 was en route from Kuala Lumpur to Beijing. Contact was lost at around 2:40 a.m. local time, Malaysia Airlines said.

There were two infants listed as passengers on the flight. The airline said it will continue to provide regular updates on the situation.

Next of kin were being directed to gather at a support facility at Kuala Lumpur International Airport.

"Our thoughts and prayers are with all affected passengers and crew and their family members," the airline said.

Malaysia Airlines has 15 Boeing 777-200 jets in its fleet of about 100 planes. The state-owned carrier last month reported its fourth straight quarterly loss. The 777 had not had a fatal crash in its 20 year history until the Asiana crash in San Francisco in July 2013.

Although it would be hard to determine what conditions were like in the jet stream, CBC meteorologist Johanna Wagstaffe said there was some haze on the ground in Vietnam and a few clouds.

"No major convective or thunderstorm activity at the time," she said.

According to China's CCTV, which cited the Chinese microblogging site Weibo, there were 160 Chinese nationals on the flight.

Chinese state TV also reported there had not been any reports received about any aircraft crashing in Chinese waters.
---------- ADS -----------
Top

CTV just had their aviation "expert" on. He said that the 777 "is a very safe aircraft, so it's definitely not aircraft related". 'Glad he cleared that up!

Simply because I do not know, is the 777 not one of the newer generation aircraft, which sends real time telemetry back to "base" so the mechanics can be standing at the gate upon arrival, with the right sized wrench? With real time telemetry, wouldn't some of the information being sent indicate an "event" at the moment it happened? Thus, you'd know about where?
---------- ADS -----------
Top 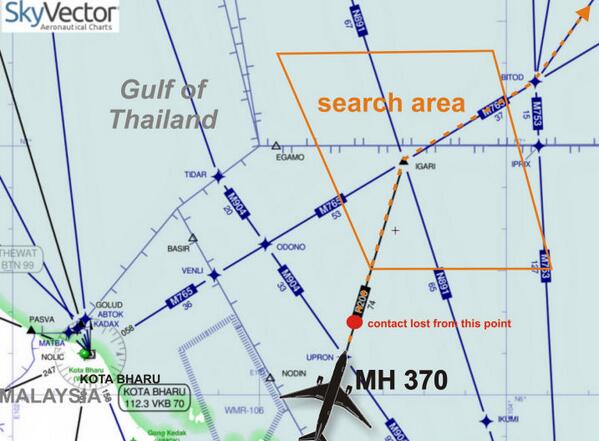 PilotDAR wrote:Simply because I do not know, is the 777 not one of the newer generation aircraft, which sends real time telemetry back to "base" so the mechanics can be standing at the gate upon arrival, with the right sized wrench? With real time telemetry, wouldn't some of the information being sent indicate an "event" at the moment it happened? Thus, you'd know about where?

There is ACARS which does send information back to base regarding potential maintenance issues, but it isn't real time.

Looks like someone whose passport was stolen a while back gets a call to their house about the plane missing, perhaps as passenger families were called, which sounds like the original passport owner was not on the plane but rather the passenger using that stolen passport?
---------- ADS -----------
Top

PilotDAR wrote:Simply because I do not know, is the 777 not one of the newer generation aircraft, which sends real time telemetry back to "base" so the mechanics can be standing at the gate upon arrival, with the right sized wrench? With real time telemetry, wouldn't some of the information being sent indicate an "event" at the moment it happened? Thus, you'd know about where?

Airbus has a fleet support system called AIRMAN. Remember initial indications from AF447 were of major 'mechanical anomalies' that AF Mx controllers received via ACARS. As far as I can tell, Boeing has a similar product, but only so far is standard on the 787 fleet. However there are 'aftermarket' tools in use that can provide data also (for example Avionica). Whether Malaysian employed anything like that, I don't know, although it seems doubtful considering how baffled the airline is itself as to what happened. Of course this is different than standard ACARS messaging systems on most large fleets which allow comm with various departments, but they are typically 'snapshots' provided by the crew or pulled from the company.

Best we can hope for is the retrieval of the CVR/FDR's.