This photo was taken in late October 1973 as the sun was coming up at the
Severn Enterprise base in Sioux Lookout. A light dusting of snow that had fallen
overnight can be seen on the ramp, dock and the hill across the bay. There are
no aircraft tied to the main dock. Float season is coming to an end.

The aircraft is Cessna 180 CF-VSD. VSD was based out of Round Lake during the
summer of 1973. It had arrived in Sioux Lookout the evening before after departing
Round for change over from floats to skis.

Freeze up was well underway when VSD left Round Lake. Ice can be seen on the
floats and flying wires. This is the time of year that the water rudder pulleys and
cables on the floats were covered in grease to prevent the steering and rudder
retract cables from freezing. The aircraft elevator hinges were coated in grease
for the same reason.

VSD will be pulled up the ramp and slightly to the right and parked under the A-Frame.
The floats will be removed and skis will be installed for the winter. The Cessna 180
fleet would be back on the ice by the end of November or early December at the latest. 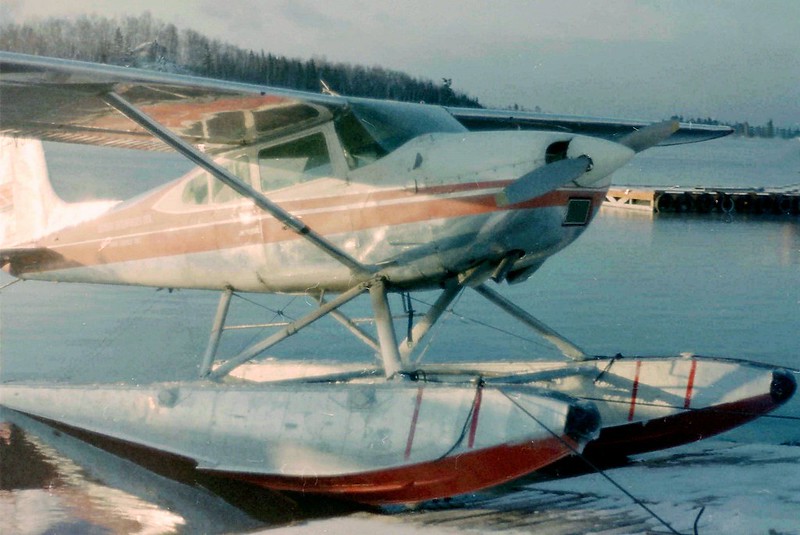 This photo is from the Dave Welch collection and it is posted here with permission.

Beech 18 CF-HVF parked in the grass on floats at Calgary in June 1973.
Cameron Bay Air Service can be seen painted on the fuselage.

Severn Enterprise operated CF-HVF in the mid to later 1960’s. I believe this “may”
have been Mr. Wieben’s first Beech 18 on floats.

HVF was a C model Beech 18 that flew out of Sioux Lookout for a number of years.
Floats in the summer and straight skis in the winter. I remember seeing HVF flying
for Severn Enterprise, but it had left the fleet by the time I started working for the
company in the late 1960’s. HVF was replaced by Beech 18 CF-WYR in Sioux.

The Beech 18 register has HVF flying for a number of different companies after it was
sold. Cameron Bay Air Service was one of those companies it flew for. The last place
that I know HVF was seen at is Silver Falls, Manitoba. It was parked off the Silver Falls
Airstrip on wheels with both engines and both wings removed. Although the paint was
faded by years of sitting outside in the sun, HVF was still painted in exactly the same
paint scheme as it was when it flew for Severn Enterprise in the 1960’s. A bit weather
beaten, it still had the white top and the narrow black speed line down the fuselage.
The engine cells were still unpainted. All in all HVF still looked pretty good.

A footnote - Two Beech 18's that were operated at the same time as HVF and possibly
may have entered service with the company first are CF-PLU and CF-PRZ.
HVF had the name Severn Enterprise on the fuselage where as PLU and PRZ had the
name Superior Airways on the fuselage. Both of these aircraft flew on floats and skis.
Both companies were owned by Mr. Wieben. 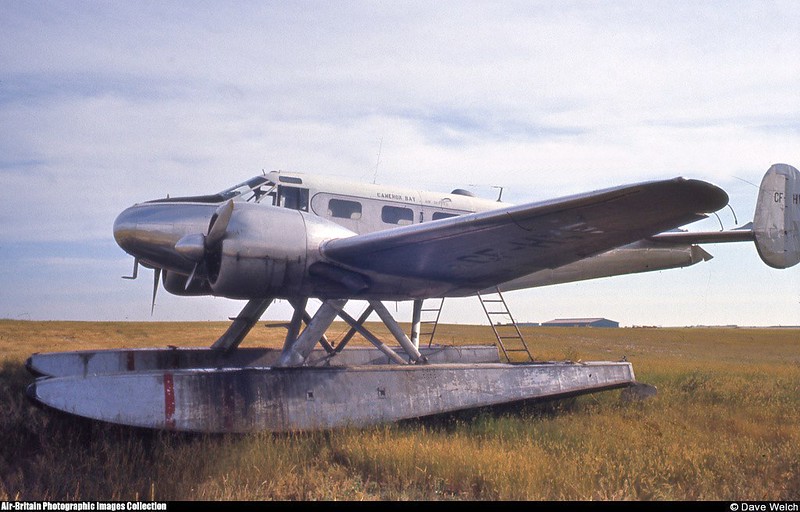 This photo is from the Ruud Leeuw collection and is posted here with permission.

Beech 18 mounted on a pole in Ear Falls, Ontario.

The “registration” painted on the aircraft is CF-EAR. This Beech is actually CF-ZQG
and was owned by Mr. Wieben at one time. CF-ZQG was purchased from the RCAF
in the fall of 1970 along with a number of other Beech 18 aircraft. Some of them
would enter service with the company. Others would be stored.

A group of men from Severn Enterprise in Sioux Lookout travelled out to Saskatoon
by train at the end of the 1970 float season. Once in Saskatoon a number of
Beech 18 aircraft that had been purchased by Mr. Wieben were prepared to be flown
back to Sioux Lookout and then on to Armstrong.

On this trip from Saskatoon there would be two Beech 18’s flown back to Sioux at the
same time. One was CF-ZQF and the other was CF-ZQG. The registrations CF-ZQF and
CF-ZQG was spray painted on the fuselages. From Saskatoon the Beech’s were flown
first to Sioux Lookout where they landed at the town airport. They were parked in
Sioux for a number of days. The date I think was into the second half of November.

Other than flying from Saskatoon to Sioux lookout to Armstrong CF-ZQF and CF-ZQG never
flew again for the company. They remained in storage at the airport in Armstrong.
How CF-ZQG got to Ear Falls and the deal made to have it mounted on the pole is not known. 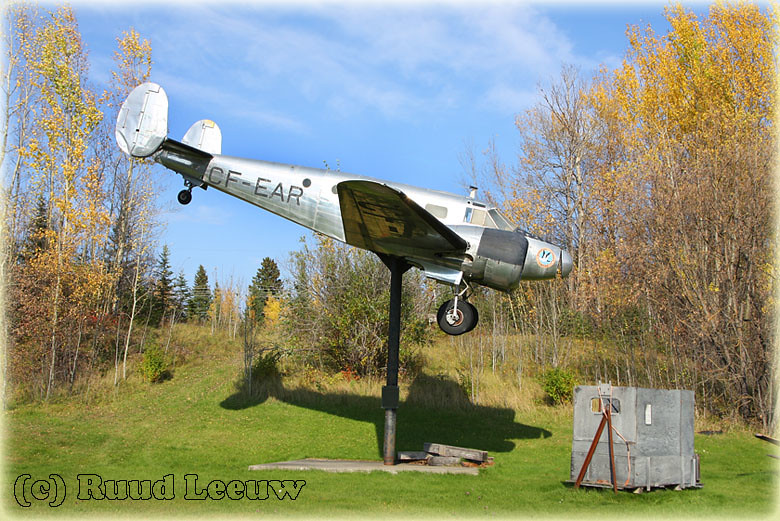 I can offer this. In Sept 1939 Junkers CF-AQV crashed near Ear Falls. About 1970 a local resident dragged the remains out of the bush. The Western Canada Aircraft museum wanted it so the Beech 18 CF-ZQG was traded for it.

This photo was taken at Pickle Lake on April 4, 1977. It was given to me by a
good friend and posted here with permission.

A bit of damage to Cessna 180 CF-IWD after a landing incident near the end of
ski season.

The left main ski came off its axel when the aircraft touched down on the ice.
According to the story as the aircraft began to nose over, full power was applied and
the control column was pulled back. The propeller contacted the ice damaging the
blades. The aft end of the fuselage buckled when the tail of the aircraft came down
hard on the ice. The tail ski stinger was also damaged. The main gear legs were okay.

Because of the damage to the fuselage, CF-IWD was patched up enough to fly it to
Thunder Bay for repair. The aft fuselage was braced on both the inside and the outside
with support beams attached to the aircraft skin. The engine crankshaft was checked for
runout and a replacement propeller was installed. The aircraft was then flown to
Thunder Bay by Mr. Wieben himself and repairs were carried out in the company hangar.

In the photo, damage can be seen to the aft fuselage ahead of the horizontal stab.
The damage to the tail ski stinger can also be seen. Propeller damage is not visible in this
photo. 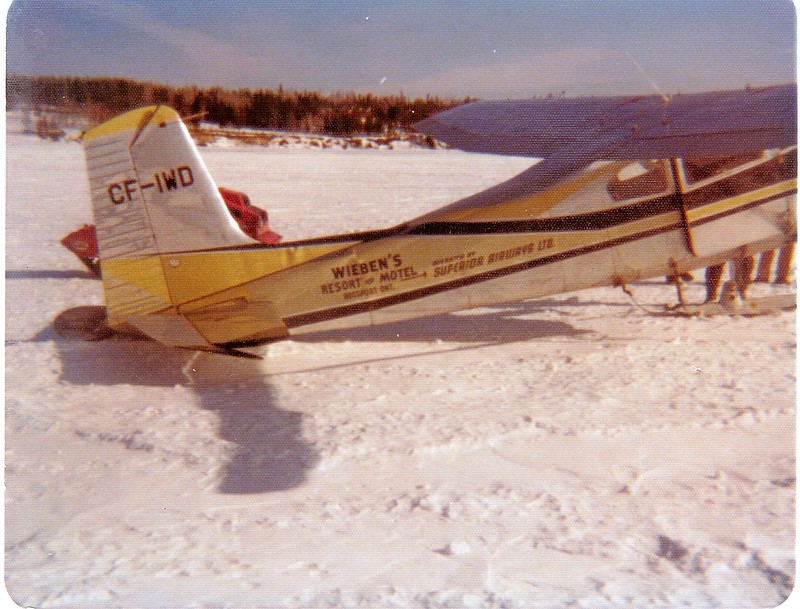 This photo was taken at Pickle Lake on April 4, 1977. It was given to me by a
good friend and posted here with permission.

A second photo of Cessna 180 CF-IWD after its landing incident on the ice.
The left main ski is being worked on. The bent propeller and the buckled aft
section of the fuselage can be seen in this photo. Also the broken tail stinger.

Under the left wing near the shore line can be seen a Patricia Air Transport
(Pat Air) Otter. 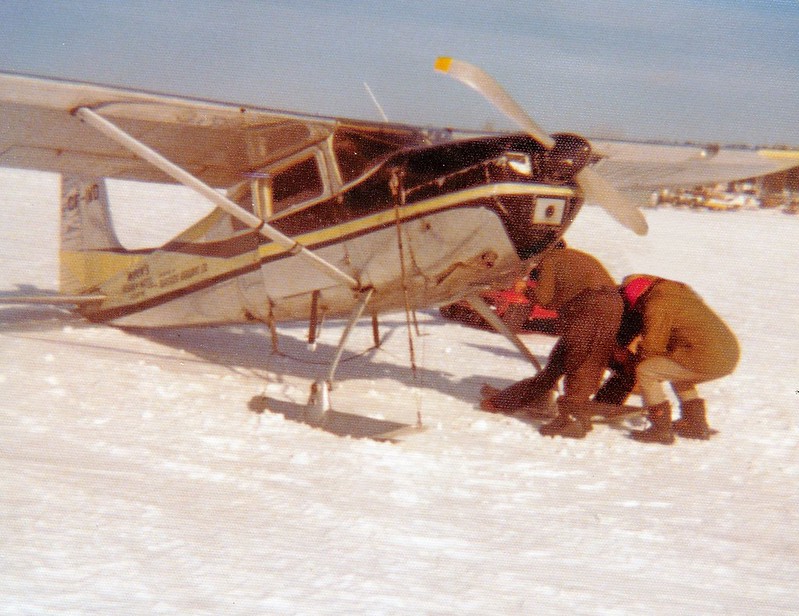 These photos are from the Ruud Leeuw collection and are posted here with permission.

A good friend came across the attached photos of Superior Airways / Severn Enterprise
Beech 18 CF-ZQH and sent them to me.

The aircraft had been pulled up on the shore of the lake it ditched in after having engine
problems while on a flight from Ft. Hope to Thunder Bay on July 28, 1978.

It appears in the photos what could have been salvaged was taken and the remainder of the
aircraft was left behind on the shoreline.

There's a photo of ZQH and what it looked like before the accident posted July 07, 2019 on
page 12 in this thread.

The accident notification report for ZQH was posted September 07, 2019 also on page 12 of this thread. 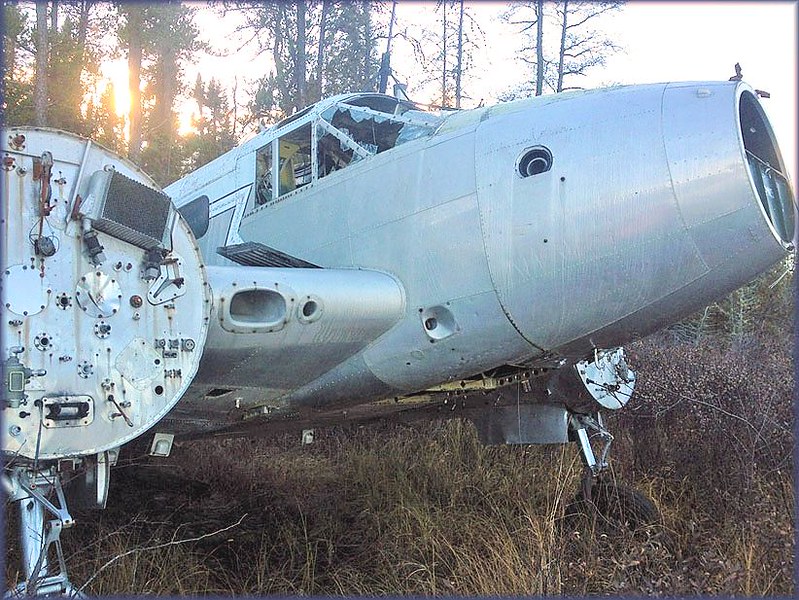 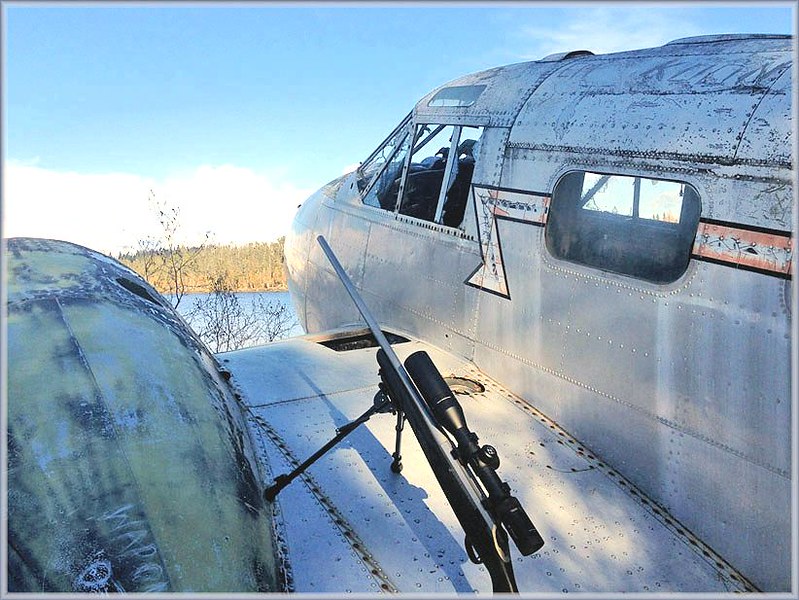