One of the pilots I worked for in Temiskamie Quebec had a picture of a Barkley Grow on floats that he flew way back. It actually had what looked like a "Belvedere" cigarette ad painted on the side. I never asked him about it because he spoke only French and I spoke only English. He was a great Chief though

That would have been CF-BQM serial # 8. In the mid to late 1960's it was owned by Northland Airlines and operated out of various bases in Manitoba. In May of 1968 I had a flight in this aircraft with pilot Ralph Birch. BQM is in the Calgary Aerospace Museum.

We have an engineer in the hanger who I jokingly call Mr. Bark n Growl, he is very good at keeping our birds in the air.

Antique Pilot - Your photos are outstanding. They are all excellent.

Some of the Barkley Grow aircraft that were operated in Canada.

Thanks very much K, you were the incentive to get me started with the pics.

Found this photo on the web.

It is Barkley Grow CF-BTX when in operation with
Canadian Pacific Airlines.

The only information provided said it was taken at
Port Radium.

Photographer is not known.
Date taken is not known except that it was taken
prior to its accident in 1945. 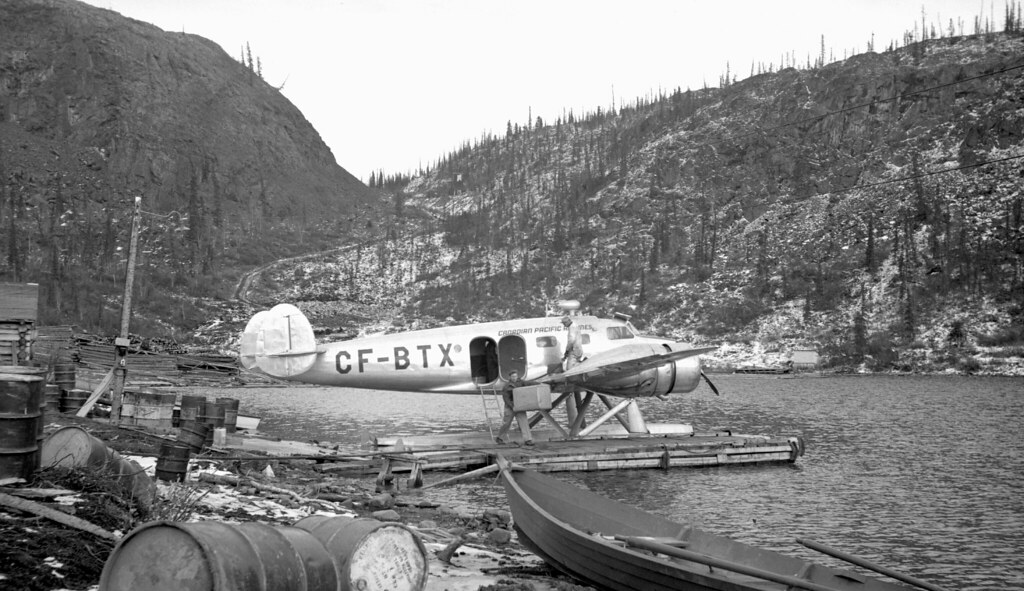 I did a bit of research a couple of years ago about Barkley-Grow T8P-1's operated by Canadian Pacific Airlines.

CF-BTX was built in 1940 (c/n 11). It was acquired from Mackenzie Air Services and registered with C.P. on the 2nd of December, 1943. It was given the Fleet Number 215. CF-BTX was damaged beyond repair at Lake Porcupine, Alberta on the 19th of October, 1945 as a result of an engine failure after take-off.

CF-BQM was built in 1941(Construction Number/Eight) It had served with Mackenzie Air Services prior to being purchased and registered to C. P. in 1942. Its fleet number was 211. The aircraft was sold to Associated Airways of Edmonton, Alberta on the 20th of March, 1950. It was later acquired by the Aero Space Museum in Calgary as a donation by Roy Staniland in 1979. It has since been restored. I remember seeing this aircraft still on floats parked beside Echo Bay's (?) hangar in Calgary back in 1982. The company had a sked with a 737 up to the Arctic in support of off shore oil rig operations.

CF-BVE was built in 1937 (c/n 1). This aircraft flew with Prairie Airways before being registered with C. P. on the 2nd of November,1942. It was sold to Mr. F. Ambrose of Long Island, New York in February, 1945. It is currently part of the collection at the Reynolds-Alberta Museum in Wetaskwin.

CF-BMG was built in 1939 (c/n 4). This was one of three of the type operated by Yukon Southern Air Transport. On the 5th of May, 1943, it was acquired by C.P. and given the Fleet Number 211. The aircraft was damaged beyond repair at Port Alberni, British Columbia on the 1st of February, 1957 after it overturned at its moorings.

CF-BMW was built in 1939 (c/n 6). The aircraft was initially operated by Yukon Southern Air Transport until brought on C.P.'s fleet 8th of January, 1943. The Fleet Number was 213. The aircraft was purchased by Mr. H. R. Peets of Edmonton on the 29th of November, 1949. It was badly damaged after it hit a sandbar after take-off

CF-BLV Known as the Yukon Queen, this aircraft was built in 1938 (c/n 3). Prior to joining C.P. on the 23rd of December, 1943 it was also operated by Yukon-Southern Air Transport. Its Fleet Number was 212. CF-BLV was purchased by Mr. H. R. Peets of Edmonton on the 29th of November, 1949. It was subsequently scrapped at Peace River, Alberta circa 1960. The aircraft now currently forms part of the collection of the Alberta Aviation Museum in Edmonton.

I remember reading about the Barkley-Grow years ago. It provided a very strong structure with multiple load paths to provide redundancy in the event of failure. When they did the static testing, the wing failed at the landing light cut out.

Great stuff Fleet. Would like to see the photo you mentioned.

Yes the wing was a complicated truss system. Very strong but difficult to repair in the field. BQM received damage to a wing when it fell off jacks during maintenance. Northland Airlines had a spare wing from another wreck and used it rather than doing a repair.
---------- ADS -----------
Top

Here is a Barkley Grow at Prince Albert Sask. Pilot Collin Campbell sitting on the wing. In the background is Fleet Freighter CF-BJW. I figure this pic was taken in 1942 as that is the year that CPA leased the Fleet. Collin gave me several of his pics years ago after I got to know him when he was flying a C46 out of Winnipeg.
---------- ADS -----------

The information below was found on the web when I was looking for information on
the Fleet CF-BJW that is in the background of your photo with the Barkley Grow docked
in Prince Albert.

Here are the significant dates for BJW as published in a directory by the CAHS:

CF-BJW was taken on strength with the Royal Canadian Air Force on the 9th of September, 1939. It was given the serial number 758. This aircraft served with the Communications Flight at R.C.A.F. Station Ottawa. It was struck off strength with the R.C.A.F. on the 20th of November, 1941 and sold to Maritime Central Airways.

Hmmm...are you sure? I looked at the history of every Fleet Freighter and can't find any mention of one going to MCA. I got my info straight from the CAHS. One thing is certain, BJW was in Prince Albert Sask in the 1940's when Collin Campbell was working for CPAL.
---------- ADS -----------
Top

CF-BJW was taken on strength with the Royal Canadian Air Force on the 9th of September, 1939. It was given the serial number 758. This aircraft served with the Communications Flight at R.C.A.F. Station Ottawa. It was struck off strength with the R.C.A.F. on the 20th of November, 1941 and sold to Maritime Central Airways.

You are referring to a Barkley Grow CF-BMV not Fleet Freighter CF-BJW.
After it's RCAF service as #758 it went back to CF-BMV and was indeed sold to MCA.
On Dec 23, 1942 it sank off the east coast of Greenland after a forced landing on ice flows. Pilot Jimmy Wade and crew were rescued.