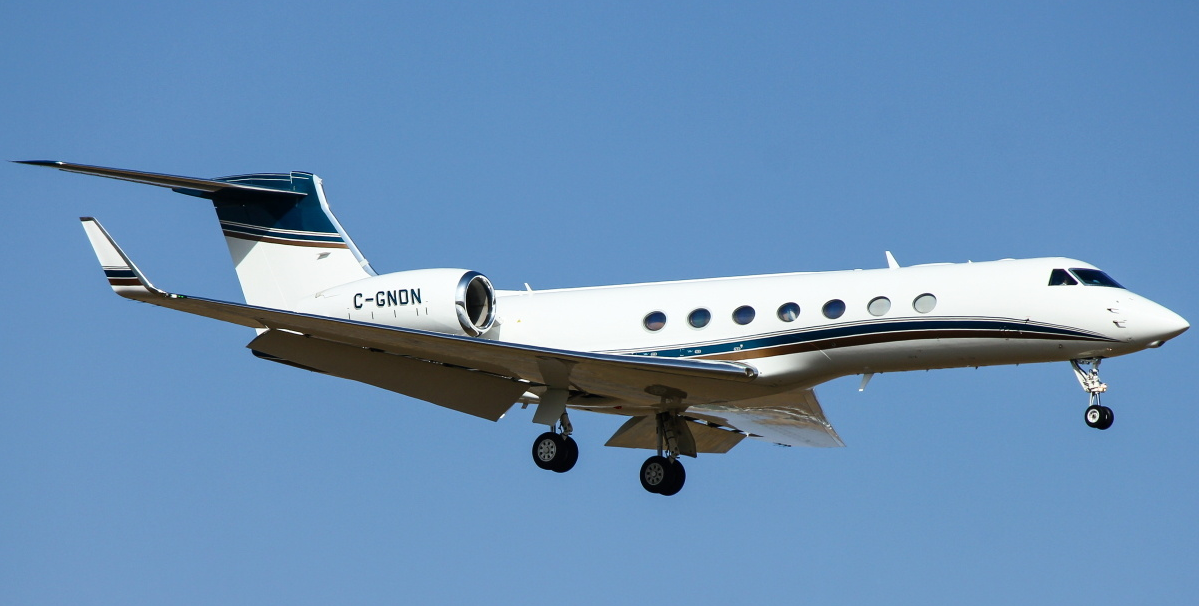 Saw it today sitting on the ramp outside the Avitat. I took a picture but on my phone and through the fence, not a good picture, sorry.

Ps, same paint and everything, you wouldn't know the difference if you didn't count the windows.
---------- ADS -----------
Take my love
Take my land
Take me where I cannot stand
I don't care
I'm still free
You cannot take the sky from me
Top

---------- ADS -----------
Courage is the price that life exacts for granting peace. The soul that knows it not,knows no release from the little things; knows not the livid loneliness of fear, nor mountain heights where bitter joy can hear the sound of wings.
- Amelia Earhart
Top

The G650 is easy to spot. When looking at it, one can notice that the cabin windows are about 30% larger than on the G450/550. Also, it's a much fatter aircraft, finally matching cabin volume of the Global Express.
The easiest thing to spot though is the cockpit wrap-around windscreen, which has a much rounder and better integrated design, compared to the short, somewhat angular design on the G450/550.

On the issue of taxiing with one of the buckets open: that's normal procedure for the Gulfstreams. both engines are at idle thrust and it beats riding the brakes. Carbon brakes suffer badly when riding them.

The 650 is truly an amazing aircraft. On a recent trip, we flew our G550 from Hong Kong direct to Vegas, taking of around 40 minutes ahead of a G650, which was going the same way. They landed almost 40 minutes ahead of us, cutting a flight time from our's of 12.5 to their's of 11.1!
Basically, we were cruising at M.80 and my best guess would be that they were doing about M.89.

On a whole, the most amazing thing about any of the big Gulfstreams is, that they carry all their fuel in the wings as opposed to others (Challenger/Global), which have a multiple tank system. On top of that, the Gulfstreams have a very clean wing.

Actually, carbon brakes only wear when they are cold. When they are hot they are very good for wear. The best thing you can do for your carbon brakes is to heat them up as fast as you can. That is also a very good reason to use the brakes when landing, not just relying on the reversers, otherwise you do more wear to them taxiing in to the ramp with them cold than you would doing a normal service stop. Most of carbon brake wear happens on the taxi out.

Exactly opposite to steel brakes.

FOD ingestion is much more expensive than replacing brakes; taxiing with a bucket open is fine if there is no crap on the taxiway, which is clearly not the case in these photos. I prefer to give them the benefit of the doubt and assume the photo was taken just as the crew has cycled them for a test.